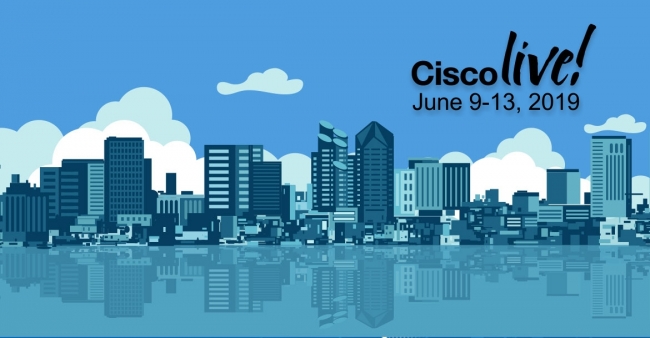 I recently began working for RedSky Technologies...as a writer. I never thought I would say I work for a tech company, but here we are! Since I’ve started, I’ve been busy writing all about E911, its importance, and how we fit into 9-1-1. So, I figured I’d switch things up. The phrase “Cisco Live” had been floating around the office ever since I started, and I decided to get the inside scoop. I sat down with Ken Rosko, our VP of Business Development, self described king of the universe and resident Cisco Live pro, to talk about the biggest event of the year.

Chelsea: In your words, what is Cisco Live?

Ken: Well, Cisco Live is a couple of things. The real reason for the show is for people to get certifications, it’s in essence a teaching event. Cisco hosts various labs where people take these high echelon engineer tests. I’ve heard they’re pretty difficult. However, in addition to these tests and the learning component, the event is also part trade show. That’s more where I stand in the mix of Cisco Live. It becomes more of a networking event, Cisco brings in their partners, customers come in. It’s a ton of people. Lots of energy.

Chelsea: So, when have you attended?

Ken: Yeah, it used to be broken up into two events per year, one for the west coast and one on the east. Now, they just do one event per year, but move it between four different cities. I’m excited for this year...looking forward to San Diego.

Ken: It’s right on the water...beautiful. And, if you book the right hotel everything is walkable.

Ken: Well, okay, let me be honest. The days are long. Breakfast is at eight, show hours are ten to five, then there’s always something social. It’s probably the most condensed amount of work I do all year. It’s hard. We’re leaving the hotel at eight and coming home at ten. But, the fun for me is the people. I’ve been going for so long that there are a lot of people I’ve met. There’s a lot of people I now know. I get to see those guys, and people I only see on Webex the rest of the year. Reconnecting with them, that’s the most fun.

Chelsea: So, why do companies go at all? What’s the benefit for us?

Ken: Well, it’s threefold...or fourfold...we’re supporting Cisco, but it’s beyond that. It’s Cisco as a whole, then their partner community, then their customers. We get to interact with all these people, we’re exposed to diverse networking opportunities that are just not possible at other events.

Chelsea: What’s something you’ve learned over the years from attending? Do you have a favorite teaching event?

Ken: Oh, those sessions are for the smart guys.

Chelsea: (laughs) So, where is your time spent?

Ken: In the Collaboration Village, which is exciting. It’s an area full of people who collaborate with Cisco, it allows the people who engage with us to immediately understand what we do, or rather how we can fit in to their environment. We can dive right in. In years past, we were in a booth on the show floor, which caters to all the technologies Cisco represents. It’s less focused. But, last year actually was great because we were positioned right behind where they were filming Cisco TV…

Ken: ...it’s this pod where they’re interviewing people all week, it’s cool, but we were right behind it, so whenever anyone watched there we were in the background…prime real estate. But, in Collaboration Village we’re just more with our people.

Chelsea: So do you feel like the networking opportunity Cisco Live presents has panned out for you...for RedSky?

Ken: I think there have been partner relationships that have been solidified because of Cisco Live. Every year when they see us in the show, or in Collaboration Village, it solidifies that we have their back...whether they’re a product business owner, or people in the partner community.

Chelsea: Do you have any specific, fun memories?

Ken: The customer appreciation [Cisco Live Celebration] is always a really great time. It’s the night before the last day, usually a concert...

Chelsea: What’s been the best?

Ken: Oh, probably Aerosmith...but for me the best part is networking with all the different communities. I always joke about how crazy it is that all these different companies even exist...how are they all making money?! But, really, it’s just an amazingly large collection of such diverse companies.

Chelsea:  So, any advice for the newbies?

Ken: Sure, so one mistake I made...this is for those going for the tradeshow aspect...like I said, the crowd is pretty amazing. I mean the number of people who go, it’s crowded. So, I brought a guy who wasn’t too experienced, he came off a little like a deer in the headlights. Make sure your team is prepared...a little more polished. Make sure they have some trade show experience before hitting the floor, and you’ve got to make it a fun experience for your team. You realize how big they [Cisco] are when you’re there, it can be overwhelming. You’ve got to keep it light, make it fun. There’s a lot of energy in the room, use that.

Ken: Drink a lot of vitamin C before you go.

Come to San Diego and meet Ken and the rest of the RedSky Team at Cisco Live in the Collaboration Village.